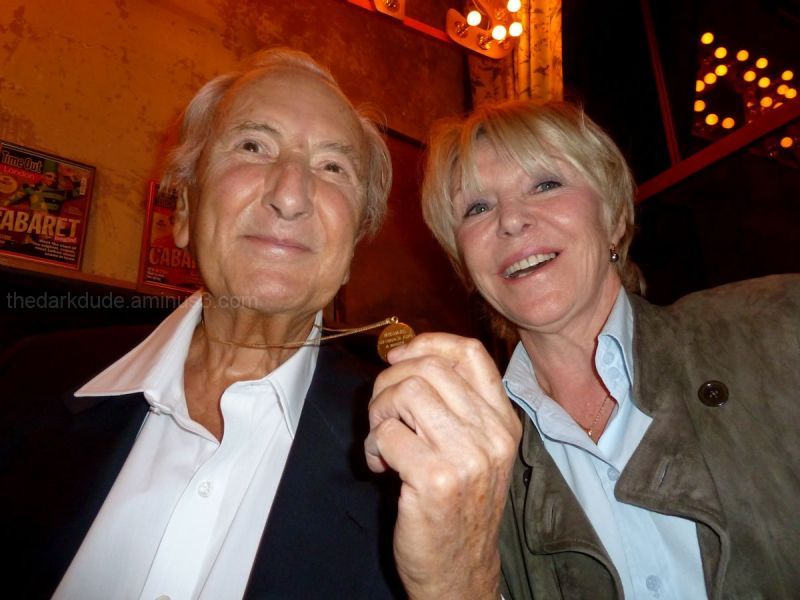 Posted by The Dark Dude (Maestoso, United Kingdom) on 22 January 2013 in People & Portrait and Portfolio.

Michael Winner. RIP.
But in the process, raise some hell with Marlon and Olly....

Heres my pic....
And if you read the story below, you'll see the relevance of the medallion....
Lovely man. Took far too long to marry the dudette above though...

So, back in 1970, Marlon Brando was asked by Michael Winner to be in a movie he was directing. Brando read the script and agreed. He had to be booked into the Mayfair hotel, and requested Michael to book him in under the name Charles Robinson and that under no circumstances was he to be disturbed. This was done by Michael himself, explaining himself fully to the hotel manager. All agreed.
A coupla weeks later, Brando is in the hotel and had asked Michael Winner to dinner at 7pm. Michael showed up at 7, and went to the desk asking for Charles Robinson.
The receptionist says 'We dont have a Charles Robinson staying here, Sir.'
MW laughs and says, 'Yes I know. Its really Marlon Brando but he wants to be known as Charles Robinson while he's here and he's asked to not be disturbed.'
Receptionist says again, 'Sir, we dont have a Marlon Brando, and nor do we have a Charles Robinson here. Im sorry.'
MW realises that this isnt gonna work, so he asks to see the manager. The manager duly turns up. MW explains the situation and explains how it was himself who made the actual booking, and he has a reservation with MB for dinner at 7.
The manager replies 'Sir, we dont have a Marlon Brando nor a Charles Robinson staying here'.
MW is now quite annoyed and says 'Look, you go up there and you tell MB that MW is here to see him for dinner'.
The manager comes closer and says 'Sir, MB has instructed me that no-one is to disturb him and to ask such people to leave.'
MW says 'Im not leaving. Im waiting for him. Right here.'
The manager says 'I shall have to call the police then. MB has given me strict instructions to say if anyone refuses to leave, especially MW, then I will have to call the police.'
MW looks up, and says 'OK, OK, Ill leave.' and walked out the lobby kinda disgruntled, but thinking that MB musta been playin some sorta joke. He got to his car, at which point, the car door opened, MB jumped out beaming, hugging him, saying 'Michael, what took you so long? We're having dinner at 7.'

So, thats the precursor to the story... heres what happened next....

A few weeks later, they were over in Cambridgeshire, filming The Nightcomers, and MW and MB were staying in an old cottage. One night over a few drinks at dinner, MB turns to MW and says
'Michael, how do you pronounce the word Integral?'
MW replies, 'INTegral', empasizing the INT.
MB shakes his head and replies, 'No, youre wrong, its inTEGral.' Emphasizing the TEG.
A discussion takes place, arguing over the pronunciation.
MB says after MW's assurity kicks in, 'Look, Michael, if you are right, I will stand in the middle of Piccadilly Circus selling French ticklers for an hour on Saturday afternoon.'
So the drinks flowed, and they went off to bed.
After filming the next day, MW goes to search out the correct pronunciation. Finds an Oxford English Dictionary, and looks it up. There it is. Pronounced inTEGral. MW is shocked. He picks up the phone, calls up MB in the cottage.
MB answers and says 'Ah Michael, Ive asked the make up dept to construct me a disguise of an old blind man, with a tray and collecting pot and theyre buying a whole load of French ticklers. On Saturday, I shall wear it, and stand at Eros in Piccadilly from 2pm til 3pm selling them.'
MW says 'No! Marlon, you were right. Its inTEGral. I shall don the disguise, and sell them myself. You won.'
And true enough, MW did sell French ticklers for an hour in Piccadilly Circus that saturday afternoon.
So...
a coupla months after filming finished, MB had gone back to the US some time before, a parcel arrived for MW.
MW opened it. Inside, was this medallion. A gift from MB. (see above).
On one side it has the inscription you see in the photo. 'Michael, the loser is also a winner'.
On the other side? Why, it has the correct pronunciation of the word Integral.
Absolute genius.

For example, what director would ever think of putting this lot in a movie together:

He told me to watch this one in particular. I hadnt seen it before. Then was led to The Sentinel.

Even though, I still maintained that my two favourite Winner movies were The Jokers and The Nightcomers.

Im sure that he said that his was I'll Never Forget Whatsisname.....

Lets raise a glass to the most individual director the UK has seen for a long long time.

The Mouse from Glasgow, United Kingdom

with thanks to Ana Lucia.